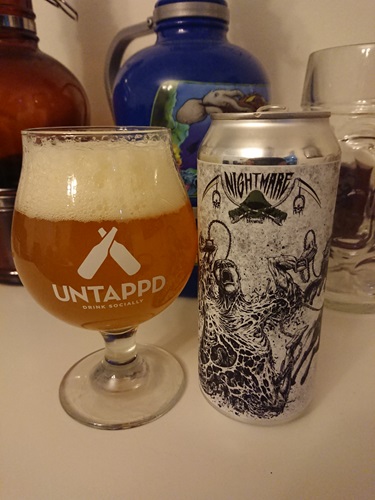 -Drawn & Quartered- Mostly carried out in the Medieval and Early Modern era, being torn apart by horses was also referred to as "disruption" or being "drawn and quartered". Those condemned would have their arms and legs chained to four horses, who would then be driven in opposite directions. This would tear the limbs from the torso and typically result in disembowelment. The limbs would then be publicly displayed on common thorough-fares. Infamous cases include the executions of François Ravaillac in 1610 and Robert-François Damiens in 1757. A Quadruple Dry Hopped Imperial IPA, Drawn & Quartered has hops thrown in, in each vessel of the brewing process (Mash, Kettle, Fermentor & Brite). As well as four separate times during fermentation. By featuring different hops at different times and stages, the flavors and aromatics range drastically. Nectarine, Mango and underlying white wine aromatics. Soft up front with tropical notes, mango, ripe pineapple, tangerine and lychee flavors. Finishes with a dank bite and alcohol warmth on the back end. Featuring Nelson Sauvin, Galaxy, Enigma & Citra along with the four horsemen of the apocalypse; War, Pestilence, Famine & Death. Enjoy fresh before it brings about the end of days.

Pairs well with: Shadow of Intent - The Prelude to Bereavement