Game of Thrones - Mother of Dragons by Brewery Ommegang 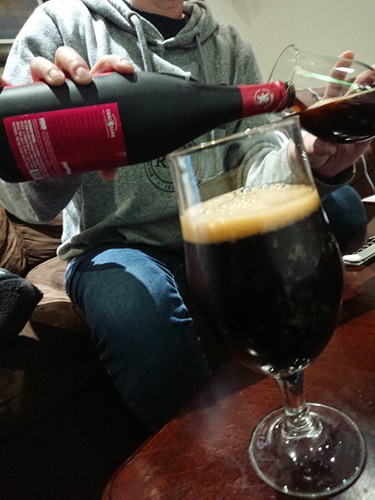 About Game of Thrones - Mother of Dragons by Brewery Ommegang

Brewed and blended for a leader who takes what is hers with fire and blood, Mother of Dragons is a blend of a smoked porter and a Belgian kriek, representing the smoke and fire that Daenerys has unleashed on her opponents. The beer will be available throughout Ommegang's distribution network on September 28 both on draft and in 750ml bottles and the suggested retail price for a bottle is $12.99.

"Mother of Dragons represents in beer one of our favorite characters from Game of Thrones. Daenerys's ascent from obscurity has been one of the most inspiring storylines of the show, and we’re thrilled to release a blend that embodies the character traits that have underpinned that rise," said Doug Campbell, Brewery Ommegang president.

Mother of Dragons pours a deep ruby-tinted mahogany with a creamy tan head. Aromas of chocolate covered cherries intertwine with subtle smoke and roasted malt. The flavor is rich with tart cherry up front leading to a center palate of semi-sweet chocolate then resolving to subtle smoke and mild sweetness. The mouthfeel is luxuriously creamy and full, and the finish is semi-dry with lingering notes of smoke and cherry sweetness. Mother of Dragons is 6.5% ABV and pairs well with smoked gouda and charcuterie, braised meats, and rich desserts like flourless chocolate cake and cherry cheese cake.