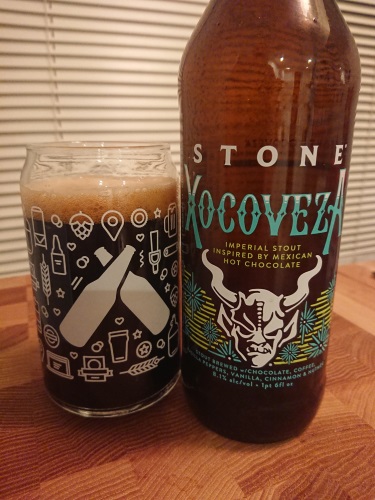 This insanely delicious take on Mexican hot chocolate is crafted with cocoa, coffee, pasilla peppers, vanilla, cinnamon and nutmeg. First brewed in 2014 with San Diego homebrewer Chris Banker after his recipe was named the winner of our annual homebrew competition, it quickly became a cross-country sensation as craft beer media and fans cheered for Stone Xocoveza…and clamored for more. We too loved this beer, so of course we caroled ¡Claro que sí!

Now gifted with a new name, Stone Xocoveza for the Holidays & the New Year has joined our eminent lineup of special releases. We’re releasing it just in time for that time of the year when the joyous spirit of giving is in the air and good behavior is generously rewarded.