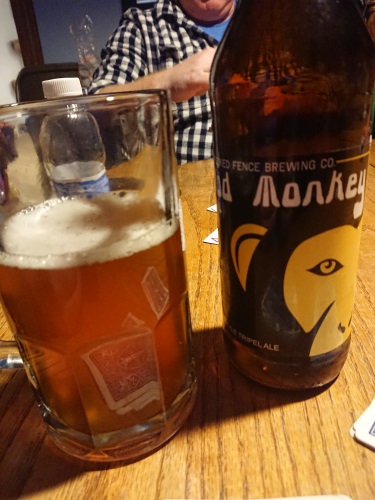 It's taken 12 years for Jeff Winn, the brewmaster at Idaho's Crooked Fence Brewing, to perfect his secret recipe for Good Monkey Belgian Tripel. His fans have been waiting for it: they lapped up the first brew in this Belgian Ale series (a Dubbel), filling the taproom with their fervor for Strong Beer. What'd he expect? Jeff's developed the brewery's local reputation, earning his Sins of Stout a spot on Reddit's list of highest-rated beers in Idaho. Crooked Fence was even listed on CultureTrip as one of the Best Breweries in the State. I asked the owner, "Have you gotten a taste of Good Monkey?" and he practically shouted into the phone: "Ooooohhh yyyeeeaaaaahhh!" He told me he plans to take the whole day off when this Tripel gets tapped. "I'll be at the bar with the rest of 'em, relaxing and drinking out of a tulip glass." Then he waxed poetic: "It's what a Tripel should be: clean. It's got that banana-y Belgian beer flavor. You know? Round and full-bodied but still crisp. And it's a belly warmer at 8.2% ABV, too." Then he told me that Good Monkey is only available in the taproom, through a few sporadic brewery bottle sales, and in a few cases he hooked us up with. Outside of our stash, there are only 20 cases left. That means Crooked Fence's Boise taproom and Tavour's app are gonna' feel like a zoo when this monkey's let out of it's cage!